I wasn't going to do an August favourites post because I did one for July and I thought it was quite soon to do another, as I wouldn't have a new set of things to talk about, but there are quite a few new/different things I've really liked this month. And thus, here we are.

August has been okay for me; the first half of the month was fueled by ongoing angst, in the wait for A Level results, which was NOT fun at all, but it seemed to go by surprisingly fast, thankfully. I was really, really pleased with my results as they got me into my first choice of university, but at the same time I was a bit meh about it, as in two of my subjects I was a few marks off of a higher grade (gggaaaaa you don't understand the frustration). But yeah, I got in, so I don't really see the point in paying far too much money for remarks when it might not even change anything.

And the second half of August has pretty much been all about sorting everything out for uni, which I find so daunting and it's getting worryingly close to the time I'll be leaving home. So it was kind of like, woo, relief of getting in and then, ahhh, I'm actually going, can I even do this.

But anyway, these are some of the things I've been liking throughout August: 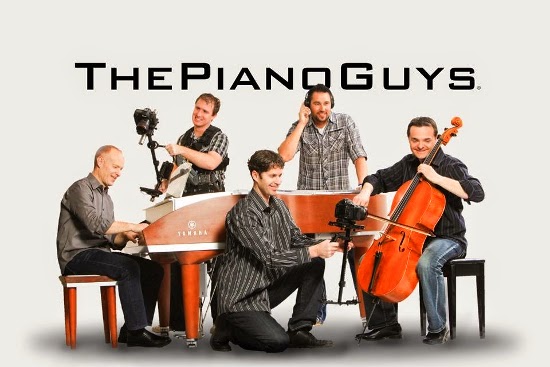 My favourite song this month is actually an all time favourite that I've just rediscovered and cannot begin to believe I temporarily forgot about because it is incredible. The Piano Guys covered One Direction's 'What Makes You Beautiful' on youtube a couple of years ago, and I could honestly listen to it forever more and nothing else. It is stunning. And it's put together in the most phenomenal way. You can watch it here and I really recommend you do. The crew of five play the song all on one piano, using the instrument in ways that most people would never think to. I cannot rave about this enough and I just think that everyone in existence ever needs to hear it. I don't care if you don't like One Direction, this isn't even to do with them, there are no lyrics sung, it's just all about the production. And you can see how much they all enjoy it and that just makes me so happy and makes me love it even more. They've done piano/cello covers of so many other songs too and they're all amazing. I hope that they come and play in the UK at some point because I just think they would be the most incredible group to hear live. I get major goosebumps just listening to them on youtube so actually hearing and seeing them perform live would seem like a complete honour. Please, please listen to this song, or any of The Piano Guys' others (another I would highly recommend is their cover with an African twist on Coldplay's Paradise), I honestly can see no way in which you'll regret it. 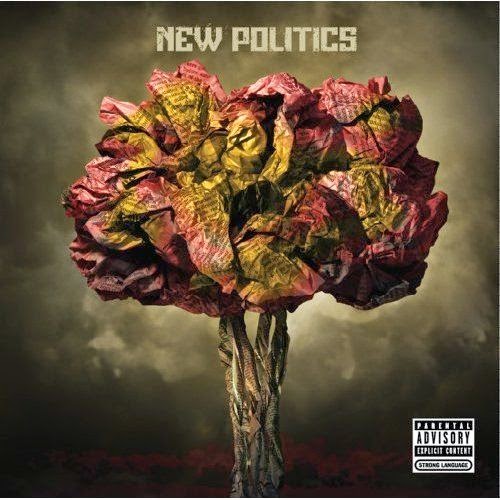 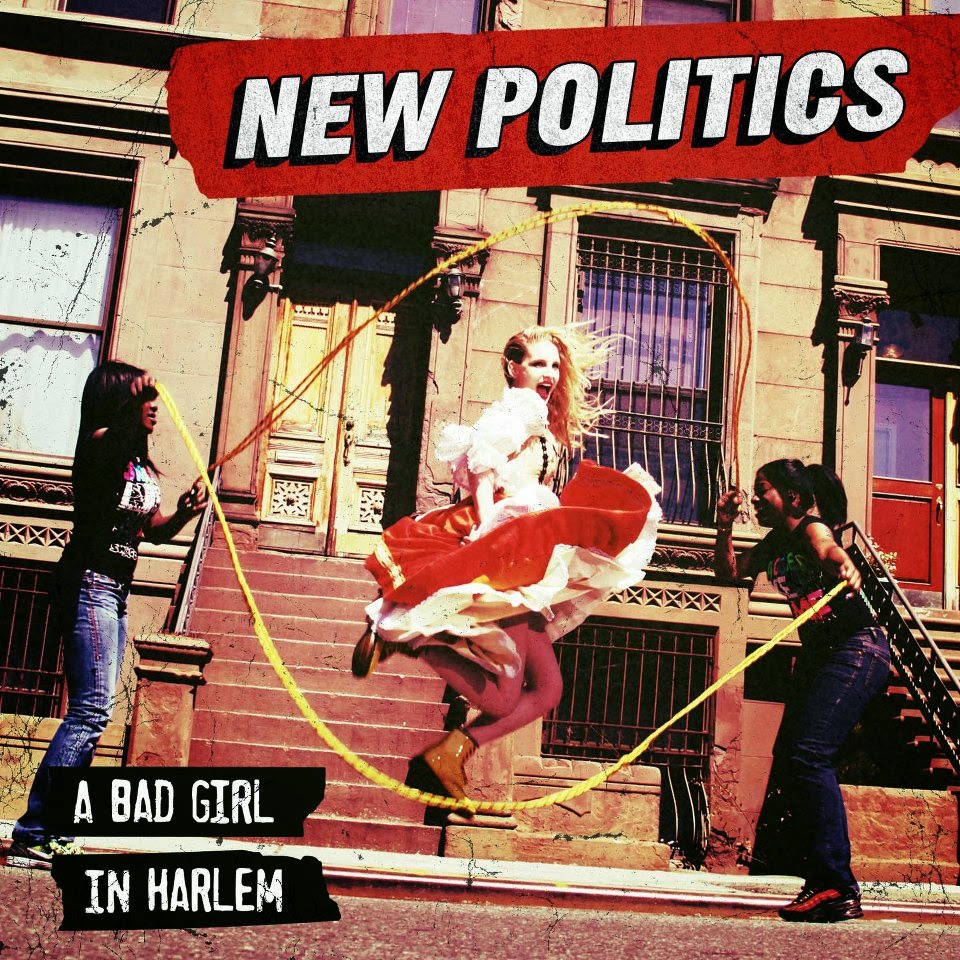 I have two favourite albums this month, but they're both by the same band, so essentially this is a 'band favourite' rather than an album, but still. I've been listening to New Politics so much recently, with both their albums, New Politics and A Bad Girl In Harlem humming into my ears pretty much every day. I didn't actually realise the band were from Copenhagen (Denmark) until a few weeks ago (even though they have a song called 'Goodbye Copenhagen' but they also have 'Berlin'/'Harlem' so let's be real, I wasn't to know) and I was really pleasantly surprised by it. I like that the sort of punk/rock/pop genre is no longer dominated by American bands, and instead there are a lot of newer bands from what would be considered 'less likely' countries; I love this simply because they bring other influences into the music, such as an electro-rock dance vibe in NP's case that's rather addictive. Both of these albums are really great, and my favourite songs would probably be 'Give Me Hope' and 'New Generation' on NP, and 'Stuck On You,' 'Fall Into These Arms' and 'Tonight You're Perfect' on ABGIH. 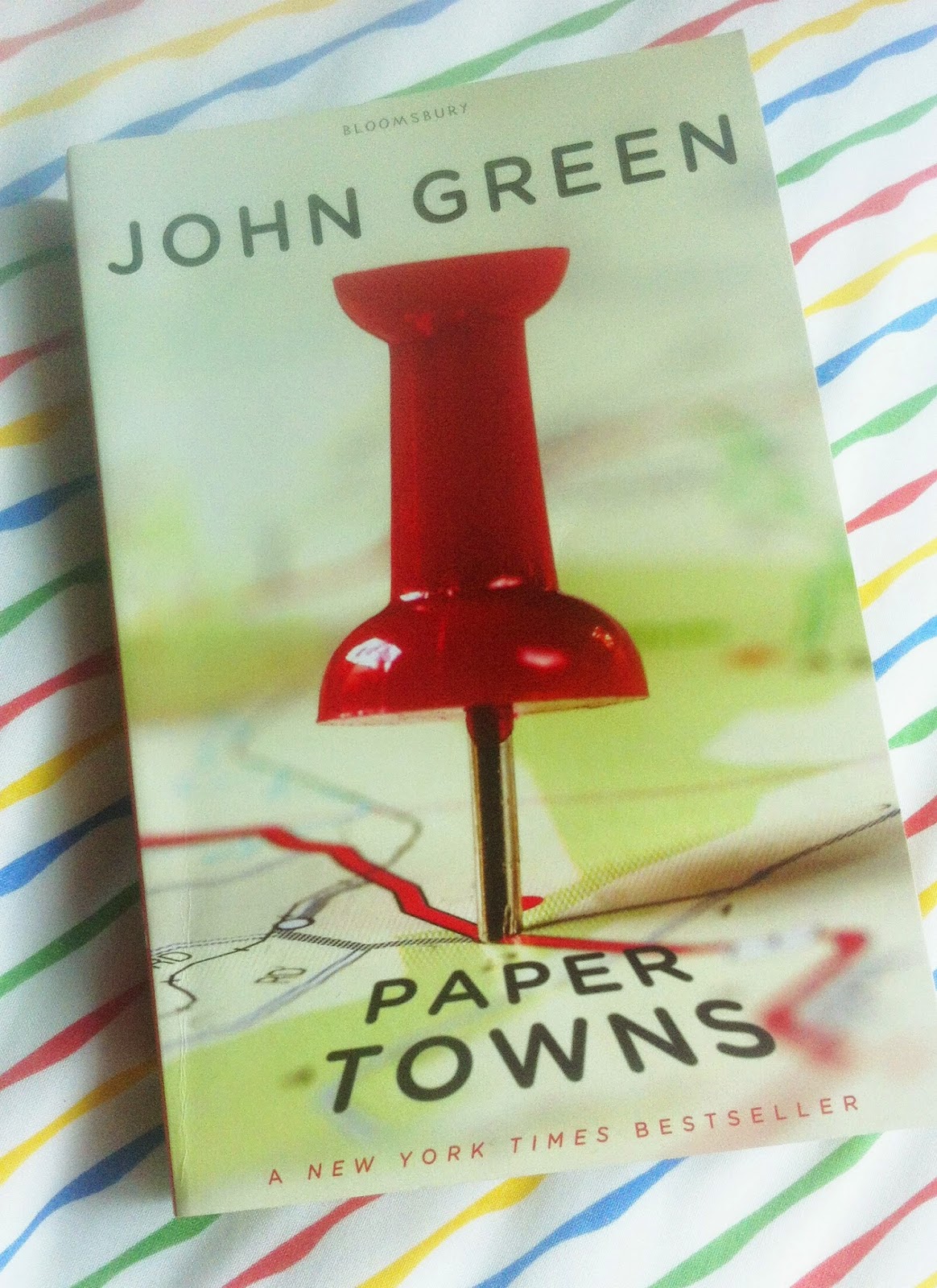 My favourite book this month has been John Green's 'Paper Towns.' I read about half of this book in one evening near the beginning of the month and then ended up having loads of family-related stuff going on, and so I didn't actually finish it until towards the end of the month, just because I had other priorities over 'personal' reading as such. But I loved this book. I liked it a lot more than A Fault In Our Stars, and I think I'd put it about on par with Looking For Alaska; it might be better actually. I think it is. I think I just prefer the male first-person narrative, I don't know, it seems kind of easier to read, maybe, I don't know. But the novel has a really great plot and it's quite intense to read but equally there's a sort of cleansing feel to it. Would definitely recommend it to anyone.

I've been so off with food this month ugh. I don't know if it's just me or the way summer makes me feel but I don't like anything. The food I think I've paid the most attention to this month is melon and I've never been convinced as to whether I actually like it or not. How boring though. It's filling without much effort or thought and it's good for you too, so it's a winner I guess. Really hoping my appetite reappears soon because I really do love food, sigh.

Juice. By golly do I love it. Orange juice is something I drink pretty much everyday, but over the past month I've been a bit more adventurous with juice. Even had apple one time. No, but really, Sainsburys do this Pineapple, Mango and Passion fruit juice and it's the most wonderful thing in the whole world. I really, really love pineapple but I really struggle to eat it because the texture makes me wanna vom. It's like a dry texture but a wet fruit and ehhhhh I just can't. Pineapple juice is great though and so I started off with just that, but when I found this - I'm not over exaggerating at all here - it was life changing. The perfect blend of fruits in juice form. Thank you Sainsburys. I am eternally grateful (please don't ever discontinue this stuff). 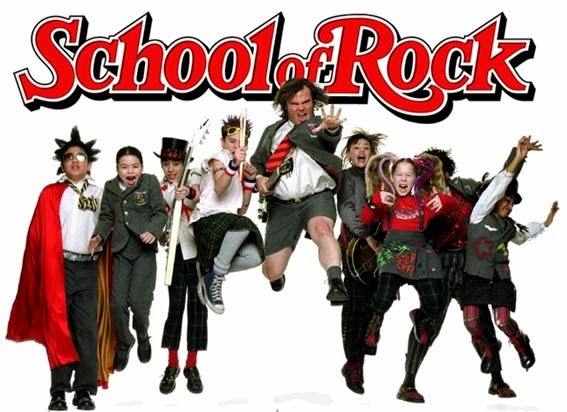 My favourite film this month has been School of Rock. Let's rock, let's rock, today. I've loved this film for so long, probably since not long after it came out, even though at that time I wouldn't have understood all the jokes buuuuuut still. I actually remember my mum not wanting me to watch it but my dad letting me anyway. It's just funny and it never gets old which is some sort of miracle because I'm someone who often stops watching a film half way through just because I'd rather do something else. Oops. I think Jack Black is such a great actor, I really love him in The Holiday (hahahah all of the Jude Law feels; send help). This film just always makes me so happy, I love the music, I love the characters, actors, generally just the whole production. Just worship the band. 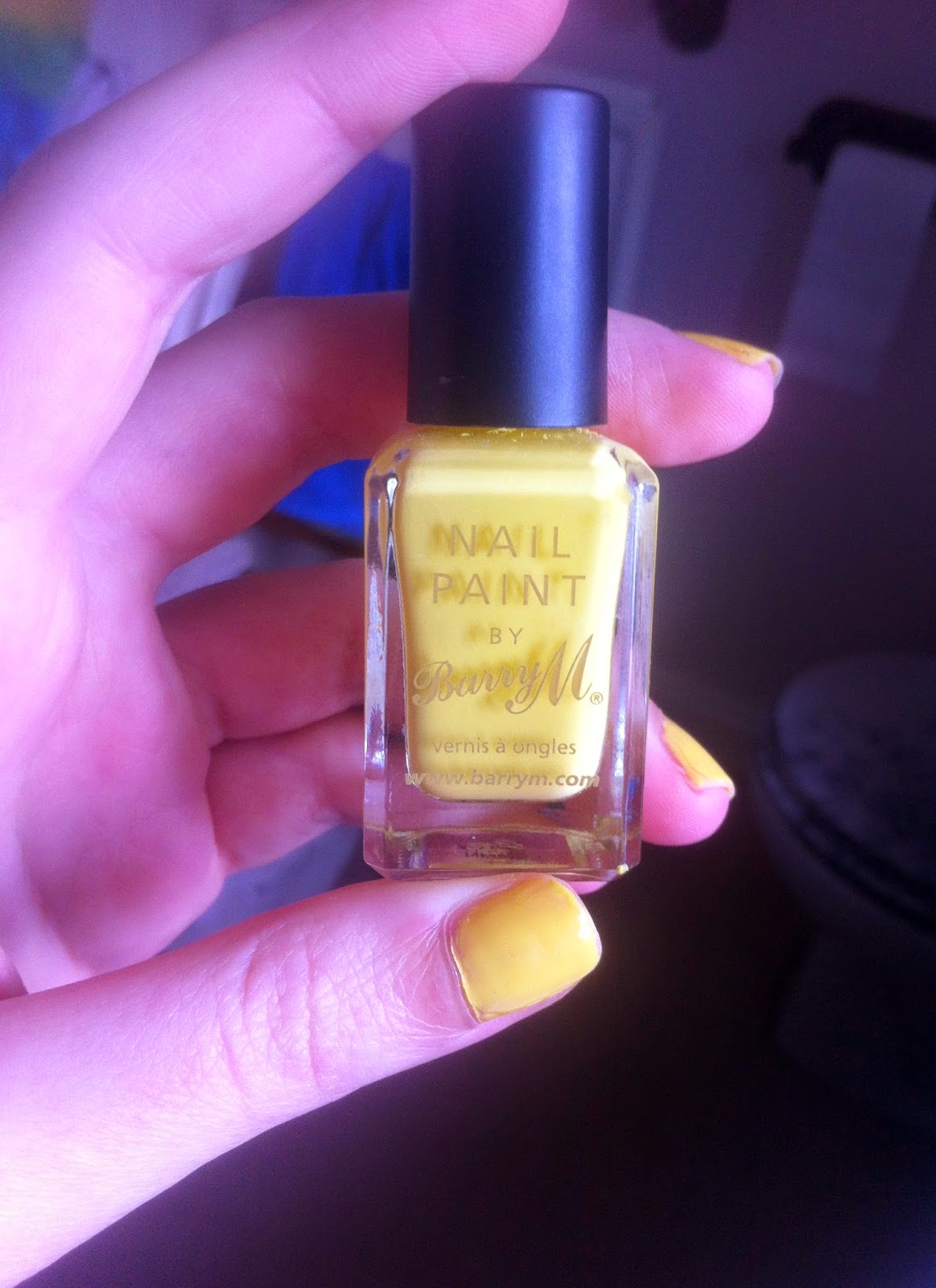 What a waste of a summer month it would be not to wear yellow nail varnish. My favourite yellow is Barry M's Lemon Ice Cream; it's not a pastel but it's not too bright and I laaaaave it. I feel like Barry M nail varnishes are just the best of the cheaper ones, like I wouldn't want to spend more than five pounds on a nail varnish and these are really good quality for the price. I use a Revlon base coat and top coat, and apply two coats of the yellow between those two for the best finish. And yeah, it lasts for about a week before chipping massively and I just really like yellow (although I'm definitely heading back to the dark colours next month (I love autumn)).

Instead of a hair product I thought I'd go with a skin care product this month, basically because I barely do anything with my hair so there's never much to talk about. The No7 skin care range from Boots is soooo good. All of their products are hypo-allergenic, so cause minimal irritation and all things considered they are very good for your skin. Their 'Beautiful Skin' Cleansing Water is one of my favourite skin care products ever. It's perfect for removing makeup, as it removes it all but also replenishes the skin as it does; it's the much better alternative to makeup wipes. The whole 'Beautiful Skin' range is for oily/normal skin and so it's perfect for me and just works really well (and smells really, really gooooooood). 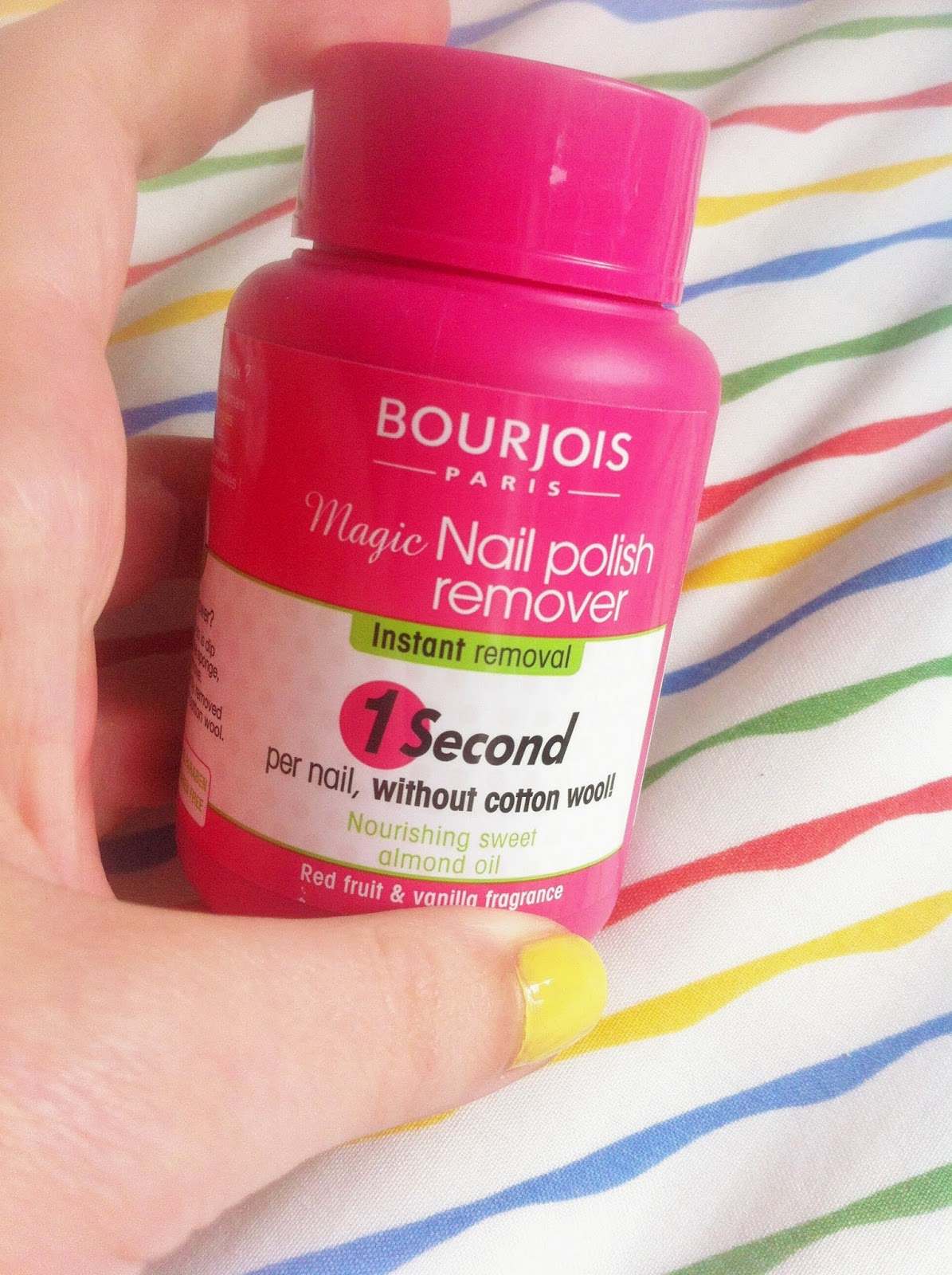 Rather than literal makeup, this month my favourite 'makeup product' has been Bourjois' 'Magic Nail polish remover.' It works really well and means you can remove nail varnish without cotton wool. In my eyes, this is a dream; I just don't really like cotton wool, because it ends up getting stuck to your nails as you're scrubbing the varnish off and it's just ehhh. No. I heard about this through Gabby (velvetgh0st), who mentioned it in one of her fairly recent videos and I am so glad I tried it. I think it was only about five pounds, which isn't much more than you'd spend on ordinary nail varnish remover/cotton wool, and it's just less hassle. You put your nail in the pot, twist it around for a few seconds and you're done. If you use a base/top coat then it will take a bit more twisting to remove the nail varnish, but I think that's understandable. And it leaves your nails smelling so nice gaaaa. I just think this product is so great. Although I have thought about it, and I'll probably still have to buy ordinary nail varnish remover for my toe nails (don't think it'd be too easy/comfortable/hygienic to do with this) which is a bit of a bummer, but at least this makes finger nails easier. 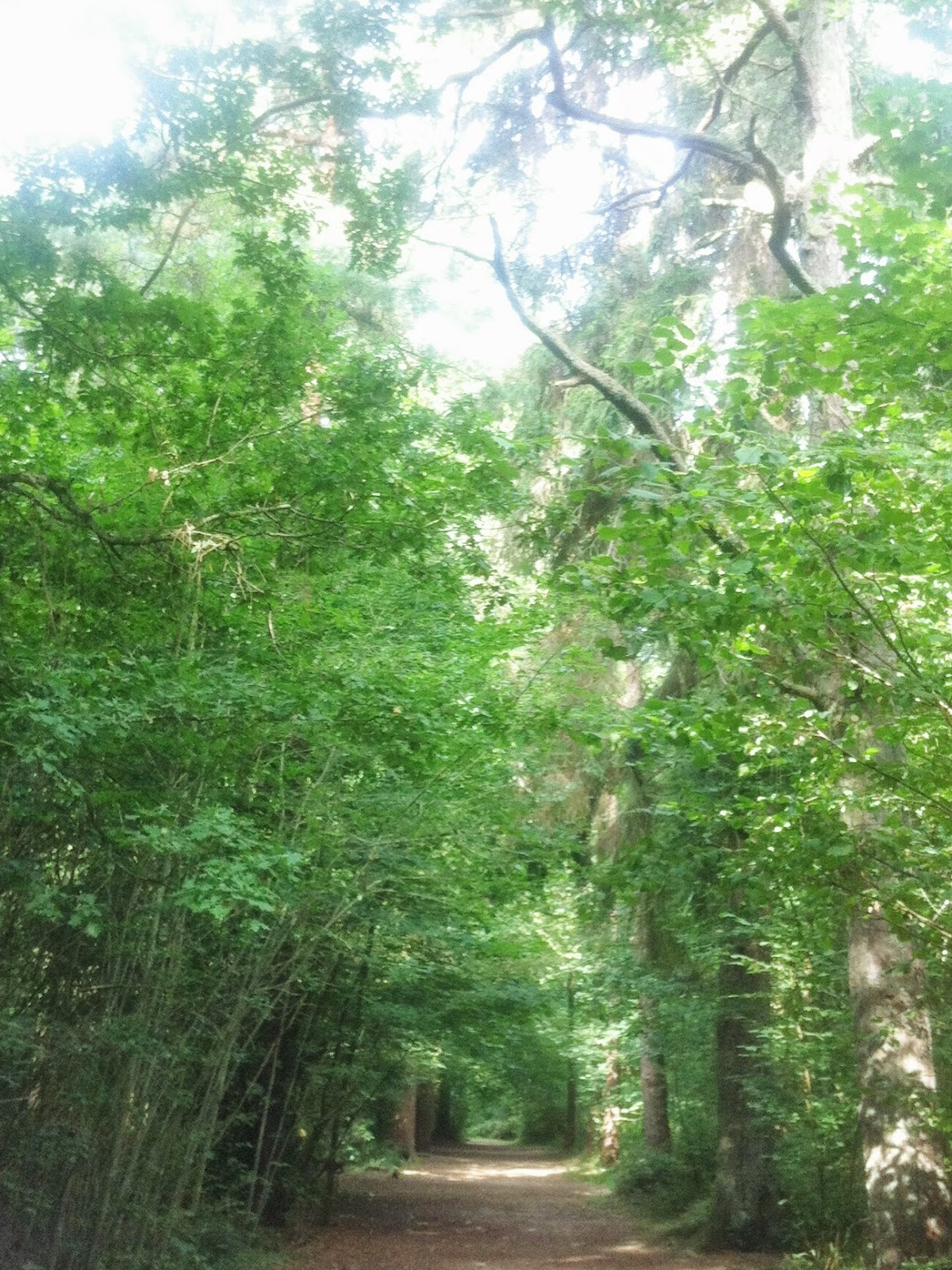 It sounds really meh, but I've just really enjoyed being at home, and in and around my hometown of Oxford this month. I'm getting really, weirdly sentimental about it, but because I'm not going to be here much in the upcoming months, I just want to take everything in so I don't forget it, as dumb as it sounds. I don't know, it feels silly because I kind of want to get away, but equally there are little things that I'm sure I'll miss for what will seem like no reason. I've never actually lived anywhere else, so I'll just feel strange not being here all the time. I've particularly liked going to the woods near where I live and walking my dog there. It's so calm and peaceful even though the motorway's only about 200 metres away; it's kind of magical actually. I'm a bit of a nature freak, like I love to be immersed in the trees and grass etc, I feel really comfortable there and I've always loved the quiet,


I'd love to know what everyone else's favourite things have been this month and what you've been up to - everything's been pretty quiet for me but it'll all get a bit more interesting next month ahhhhhhh (I'm literally so scared). Hope everyone's had a lovely August :)