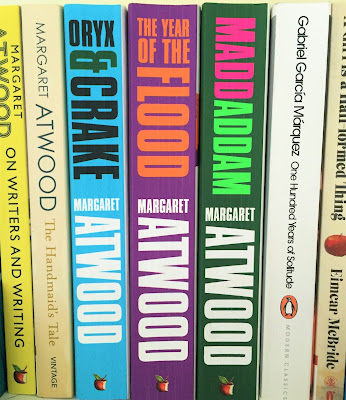 For my 21st Century Literature module this year, I read Margaret Atwood's Oryx and Crake, and I loved it. Therefore, during the revision period, I read the two further texts that Atwood wrote in series, where the action occurs alongside that of Oryx and Crake in The Year of the Flood, and then following on with the characters in each book coming together in the final text, Maddaddam.

The texts are described under a number of genre titles, including dystopian and science-fiction, but ultimately Atwood describes them as speculative. This is because the events that take place are based on both things that have happened and could potentially happen in the future. The things that could happen are only an extension of what has already happened in the world. Everything is entirely possible, and I think that's what I find so interesting. The texts give a suggestion of the earth's future should humanity continue down it's current course. Atwood's writing seems to both warn and encourage the current route, depending on how you should choose to read the books.

The first text centres around the character Jimmy and a new group of humans called 'Crakers'. The Crakers have essentially been designed to take over the human race, with specific features, such as UV-resistant and insect-repelling skin, in order to cope with the way that the earth has changed due to climate change and a number of other factors. The novel forces a discussion of the technology used to create this new-human life form, and the way that such technology can also be destructive.

In all of the books, the reality is that a kind of plague, or 'flood', has intentionally killed off almost all of the human race, and the Crakers must now take over - with the guidance of Jimmy. But in the following texts it becomes apparent that he is not the only person to have survived.

The series makes for a really interesting read, especially considering how many of the details rely on actual facts and possibilities. I love the way that the series is structured, as it works really well showing different characters' perspectives of their experiences.

This is a set of books I would highly recommend reading. They're really easy to get into and have a very accessible style, as well as discussing very topical issues.