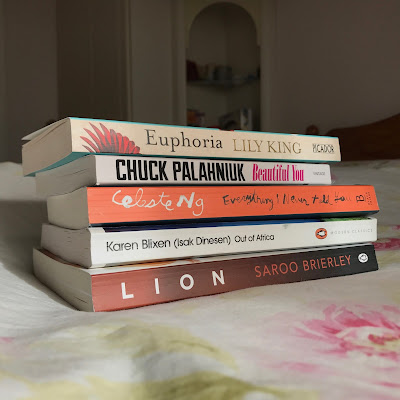 I've recently been watching all the book videos I can find on youtube and have been absolutely loving them. It's always so nice to hear about what other people have been reading, what they liked about certain books, and getting some inspiration for my own reading. So I thought I'd try to do some monthly/bi-monthly book posts on here, as I'm nothing if not a book fanatic. Here are some of the books I've been reading throughout the month of July and what I thought of them.


Out of Africa by Karen Blixen

I loved the concept for this text, but I can't say I loved reading it. It's a bit hard not to read a memoir, such as this one, as a fictional text, and I think that's where I found the book fell short. The descriptions and people in the texts were interesting, but the form just didn't work for me. It felt very - this happened, then this happened; I hate to say a bit Key Stage 2, but that's how I found reading it. The actual contents of the text was interesting, but unfortunately it was harder to enjoy because of the poor form. I think it must be difficult to structure a memoir though, so credit where it's due, as this is a strong text, it just lacks the stringing together that could have made it really great.

After reading Out of Africa I plunged myself into another memoir, partially for comparison, but mostly because this one sounded like it would be formulated with a slightly more fictional flare. I believe the original title for this text was A Long Way Home and that was then changed to comply with the film, which is always a little disappointing, but nevertheless the title does work with the book. I'm yet to watch the film but I thought the book was incredible. It's written in the style I was hoping Blixen's text would have, with real substance and feeling, and ultimately a plot line. I know that plot isn't the point of a memoir, but it makes it so much more gripping and easier to read. Really loved this one.


Everything I Never Told You by Celeste Ng

I've had this book lying on my book shelf for ages so I thought I'd finally give it a go, and I enjoyed it. You gain a lot of different perspective throughout the text and it jumps around a lot temporally, which can be very hit or miss, but it worked so well with this book. It's a very heartfelt text, showing every side of family dynamic that isn't really working well. Ultimately, as the readers see each characters' perspective and feelings, the other members of the family become more aware of each others emotions. It's a text where everyone seems to grow whilst dealing with a great loss. Beautifully written.

Euphoria was a really interesting book, with themes of anthropology, interaction, and loneliness. It seems a study of the study of humans, as while the characters themselves are anthropologists, learning about human culture in New Guinea, the author gives us an insight into western humans, ultimately unveiling the differences and extreme similarities that all humans bear. I really liked the character of Nell, who seemed passionate about the cultures she was engulfed in and about conveying them correctly in her research. However the other characters were a little more disappointing, but I think that was the point. Having a female with integrity in a research based field in the 1930s shows an empowered and intelligent woman, but sandwiched between two men who think they always know what's best helps create an even bigger bias towards her character. A good read.


Beautiful You by Chuck Palahniuk

The final book I'll mention is completely different to all the others, being more of a dystopian text. The novel follows a somewhat bizarre, but equally convincing, plot line, where women become obsessed with a new range of sex toys offering them the ultimate pleasure. Essentially it shows a man using these toys to gain absolute power over a nation of women, moving society back about a hundred years to when women were not in high flying jobs. I thought the character of Alouette was particularly interesting to read and, if anything, would have liked to hear more from her. Nevertheless, it's an interesting and aggravating text, with an easy-going style and I think it's well worth the read.