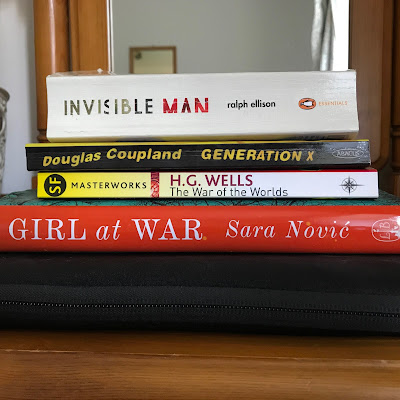 This month I read a bunch of very different books, ranging from Victorian sci-fi to 90s genocide and the breakup of Yugoslavia. All very interesting texts, so here are my thoughts on them.

Honestly, I loved the book but hated the main character. There's something really unlikeable about Ana as a person. Obviously, she had a very traumatic childhood, as the book follows the breakdown of Yugoslavia and the effective violence and conflict. However, she seems to position herself above others in the novel, and acts like she's still a young teenager when she's in her twenties. I always find it difficult reading an interesting and thought provoking book when you're seeing everything through the eyes of this kind of character. I felt like I was missing out of some of the more important things, some of the history and such, because of Ana's character. But, other than the protagonist, I thought the book was very effective, well written, and an accessible insight into these historical events.

Generation X is a bit of a strange book. It's basically a novel without a plot, which, I can appreciate, but it just sort of circles around a few, relatively uninteresting things. It does, as the title would suggest, give you a good understanding of a generation that came before mine, so I can empathise with the central characters: a group who don't own property, aren't working in jobs they care about, see no real future so imagine various scenarios and live life through their own short stories. I really liked the content of the book and the endeavours of the central characters, I think I just found the structure, as effectively a series of short stories about a trio, a little hard to read as a novel. Nonetheless, if you're okay with something slightly incoherent style wise, then I'd definitely give it a go.

I can't say this was the most enjoyable read, but I certainty appreciate the prestige of the book. Being one of the first ever texts to imagine the extraterrestrial, it's certainly a must-read for anyone with a love for literature. It is a very interesting novel, especially considering the Victorian nature of the text, however, I didn't like it as much as a lot of the other texts I've read from the era. There was a slight discomfort in the style for me, I'm not sure if that was because Wells was describing something new and groundbreaking or quite what it was, but I didn't find it read all that well. I didn't really like the digression back and forth and around his brother; if it's a first person text, I do tend to prefer the primary voice to be the one we see things through rather than at such a remove. However, of course the imaginative and innovative descriptions are highly engaging and certainly more enjoyable than the style. I'd say read it, but don't expect to love it.

This was by far my favourite book I read this month. It is so well written and discusses important issues and ideology. The narrator was a very interesting character and showed the struggles of his race in a seemingly authentic manner, offering the ups and downs. I found the discussion of race within the African American community particularly interesting, with the differing views and the struggle to find a voice and to find a way to move forward after such discrimination. The unpicking of the relationship between identity and Marxism was particularly thought-provoking, and it certainly read as a text to be deciphered and properly unravelled rather than simply scanned over. A very important text and one that should definitely find itself upon your bookshelf.