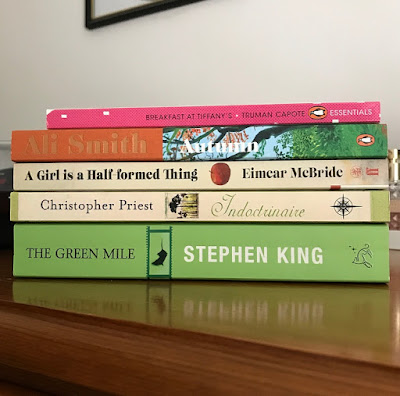 I love this book. Honestly, it's one of the most beautifully written novels I've read in a long time. It's not overtly beautiful though; there are a lot of really special intricacies that I truly fell in love with and the language, though often plain and simple has that little something extra about it. The novel is surprisingly political, and addresses recent events, such as the EU referendum and subtly mentions the migrant crisis. These are discussed really well, despite not having the full attention of the author; the subtlety is actually a lot more affective. I loved that as readers we got a little bit of everyone's story in order to create this one. I know that's something that might frustrate other people, as you may wish to know more about certain characters or hear about elements of their lives in more detail, but for me the novel addressed everything as it would be in real life. You never know everything about anyone, it's always fleeting details that come out unexpectedly at unanticipated moments. A truly beautiful novel; I can completely understand why it's shortlisted for the Man Booker Prize this year.

The Green Mile is actually the first Stephen King novel I've read, and it did not disappoint. One of my colleagues is low key obsessed with King's books, so I thought it was about time to give him a go; this novel gave a good insight into the author's style and themes. I loved all the little intricacies the text had to offer, with a complex plot and some easy access characters. It read very well, with subtle suspense implemented throughout. There are some fairly disturbing scenes, naturally, but none that I found particularly upsetting until the very end. The part that actually upset me wasn't something I would usually be set off by, but I think King has made you as a reader a lot more sensitive by the end of the book, so perhaps it makes more sense considering the constantly heightened emotional link you feel with the characters. A true masterpiece.


A Girl is a Half Formed Thing - Eimear McBride

I was expecting this to be a very different text from the one I got with McBride's novel, I must say. Naturally I was expecting it to be sad and disheartening, which it was, but I think it may have been a little harsher than necessary. The novel depicts a girl who suffers some different kinds of abuse while growing up, which effectively leads to her thinking she needs that suffering and that's how her life should be. It's quite upsetting, so I wouldn't recommend reading it if you're at all sensitive to abusive topics. I hated the style of writing, and found I just wanted to get the book over and done with because of it. It's almost as though the author just bullet pointed half the sentences and forgot to add in all the missing words. I completely understand that this style does lend to the subject of the book and I really appreciate that, but I also did not like it at all. Definitely not a favourite of mine.

I read Breakfast at Tiffany's in a couple of hours one afternoon, and I loved it. It's such a beautiful novella and Capote's writing is always well-structured and reads brilliantly. I've actually never seen the Audrey Hepburn film, but I did see this text as a play a year or two ago, and the play seems to have been very true to the text and was wonderful and moving to watch. The narrator, 'Fred', isn't a favourite of mine, but naturally we are shown Holly through masculine eyes; I think we do see her well through this vision, but I would have liked to hear more about what she herself thought rather than what he had to say about her (isn't that always the way with these texts though). But yes, short as the novella may be, it is truly remarkable and I would highly recommend taking those few hours out to read it.

Really thought I was going to enjoy this one but it was a major flop. It had potential, a science fiction novel set between two different times, with a chemical that needs an antidote. But it just wasn't good. I didn't like a single character, I didn't understand why they were doing most of the things they were doing, none of it was interesting. Also, my text (not sure if it's all of them) seemed like it hadn't even been proof read - there were countless grammatical errors and it kind of drove me insane and made me not want to read it at all. 100% would not recommend.


What have you been reading this October? I'm always up for recommendations!