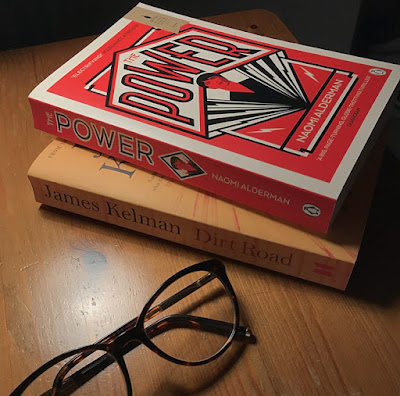 Welcome back to the blog! Apologies for the lack of content this first month of the year. As previously mentioned, I've been very unwell recently and therefore have been doing very little in my free time, reserving it for lying down and mindlessly watching Friends, basically.

I've been more on the book bandwagon than I was towards the latter end of 2017 though, making my way, slowly but surely, through two novels of a good length this month, and almost finishing another. One of the texts I loved, and the other, though by no means bad, wasn't exactly to my taste, although I still enjoyed reading it.


The Power by Naomi Alderman

I started this book on the first day of the year, and it's an interesting one to begin with. I actually just read that Barack Obama said this was one of his favourite books that he read last year, and I can certainly understand why. It's a super fast-paced read, essentially formulating the idea that women have a secret power in the form of electricity running through them, described as similar to electric eels. The book completely subverts common assumptions and portrays of gender, and does so in a way that still needs to be done in literature and in gender conversation. Alderman has done something really interesting with the letters that frame the novel as well, with the final letter sincerely depicting the struggle women still have in literature, and in life. You kind of love and hate each of the characters throughout the different stages of the book, which I found interesting. This is largely dependent on when you feel sympathy and empathy, and when they've taken things too far with the power. It is, nevertheless, a truly impressively thought out text, fuelled with irony and many laughable, though somewhat serious, instance, and it's one I would recommend to all.

Dirt Road is very much about loss and loneliness, and trying to find a way to articulate those feelings whilst in an unfamiliar environment. The novel feels a lot like an in-the-moment expression of these feelings, with the pace creeping up every time Murdo, the protagonist, in particular, has something he wants to share but is struggling to do so. This gives a very raw, heartfelt narrative of a boy from Scotland trying to feel okay and feel like himself in the deep south of America. Essentially the way he becomes himself in this situation is through music; music leads him through this novel and seems to give him optimism, healing the pain of his past. At time I felt slightly disconnected from the book because of the constant change of pace, but equally that was the best way to show the rollercoaster that Murdo and his Dad were personally experiencing. I think the novel gives a great insight into the human experience, putting you alongside the central characters, going through the motions. It's not my favourite book, but it's one I'm glad to have read.


I’ve also been reading The Sympathizer by Viet Thanh Nguyen this month, but unfortunately still have about a hundred pages left, so I’ll have to tell you what I thought of it next month.


I'm always looking for books to add to my to-be-read list, so if you have any recommendations please comment them below, they will always be greatly appreciated.