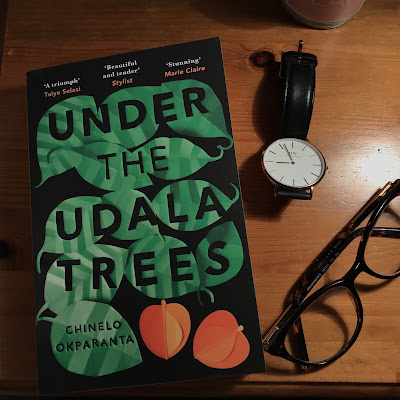 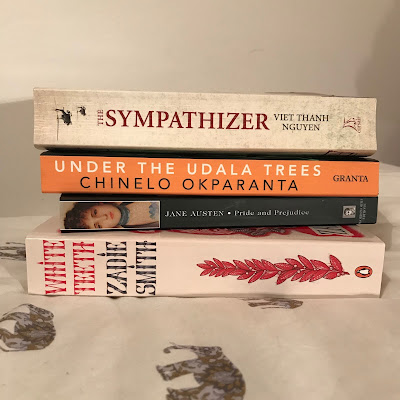 It's been a busy month for me book-wise. And I'm currently on a week off from work, so you can bet that I'm spending a large amount of time curled up in a corner with a book. I've read lots of fairly different novels this month, varying in culture/place/time period/style; all of which, though, I have sincerely enjoyed, so I'm very pleased with this month's reading as a whole. Hope you enjoy my mini review of each, and perhaps they'll inspire your own future reading.


The Sympathizer by Viet Thanh Nguyen

I completely understand how this book won the Pulitzer Prize for Fiction in 2016. The book presents what feels like an incredibly raw experience of the Vietnamese War from the perspective of someone who is somewhat between the eastern and western worlds, having been brought up in Vietnam and being educated in America - something the character describes as being in two minds. It's a very intriguing, essentially confessional, text, about always feeling like a double agent and constantly betraying one part of yourself, as the narrator is, to an extent, a communist sympathizer despite fighting against communism in Vietnam. The novel is primarily about identity, love and friendship, and the way these themes are combined to bring this novel together is truly remarkable. A must-read.


Under the Udala Trees by Chinelo Okparanta

I've read quite a few Nigerian novels that I've really enjoyed over the past couple of years, so I thought I'd go for another one this month. Like Half of a Yellow Sun by Chimamanda Ngozi Adichie, which I read last year, this novel is set partially during the Biafran War. It follows the life and story of Ijeoma, a girl who grows up knowing that her sexual orientation is different from what her culture allows. Ijeoma's mother essentially tries to brainwash lesbianism out of her daughter, using religion to condemn her child's feelings. It's a very heartfelt novel, exploring primarily identity in an oppressive environment. The hardships Ijeoma faces are constant throughout the text, but the ending falls on something truly beautiful and accepting - I teared up a little, which basically never happens. I loved this book, and I'm sure you could, too.


Pride and Prejudice by Jane Austen

Can you believe that I, an English graduate, have never read Pride and Prejudice. I've been meaning to get round to reading all the classics that weren't on my compulsory reading list for school or university, so I thought, what better to start with than a classic that everyone knows, like Pride and Prejudice. Now, I have previously seen the Keira Knightley film adaption of this text, which I absolutely loved, so I knew in advance that I would enjoy reading this one. Elizabeth is a great character; she's very strong-willed and opinionated, which, though would have considered her 'difficult' at the time, truly paves the way for women in future literature and life. Whilst Austen obviously conforms to the cultural expectations of women during her time - Elizabeth's youngest sister is considered to ruin the reputation of the whole family at one point in the text as a result of not behaving as required - she equally pushes the boat out in small ways throughout the text. What more can I say? It's a classic for a reason.

I don't know what I was expecting White Teeth to be like, but this was not it. In a good way. The novel has a four part structure, giving particular focus to certain central characters in each, building their relation to the other characters through religion, culture, gender, race and history. The book primarily looks at the relationship between culture and identity in late 20th century Britain, focusing, particularly, on being British but also having a heritage that derives from a colonised nation. Through this central idea, comes so many other specifics and struggles, and Smith writes them tremendously. And I love that the novel tackles such big themes and does so in detail, yet, the novel is still so readable and accessible to all audiences. The only thing I wasn't enamoured with was the ending. I liked the pace throughout the majority of the book, but the ending felt slightly rushed to me. I'm personally a fan of open, somewhat 'unended' endings, so that wasn't a problem for me, however this one just left me feeling more unsettled and a bit doubtful. I thought it could've been stronger basically, more realistic maybe, as the rest of the book felt very genuine throughout. The ending kind of lost that for me. That's my only real criticism though - primarily I thought it was compelling, heartfelt and well structured. It's entertaining, it's intriguing, it's downright interesting. Equally, it's very difficult to summarise in a mini review like this, so I can only recommend that you add it to your reading list.


Book recommendations are always welcomed, so if there are any texts you've loved recently, please let me know!