Welcome back to another monthly book post.  I'm really making an effort with my non fiction reading at the moment, this month's including some of Virginia Woolf's essays, as well as some great novels, as always. Please feel free to let me know what you're reading at the moment, or if you've read any of these texts and what you thought of them. 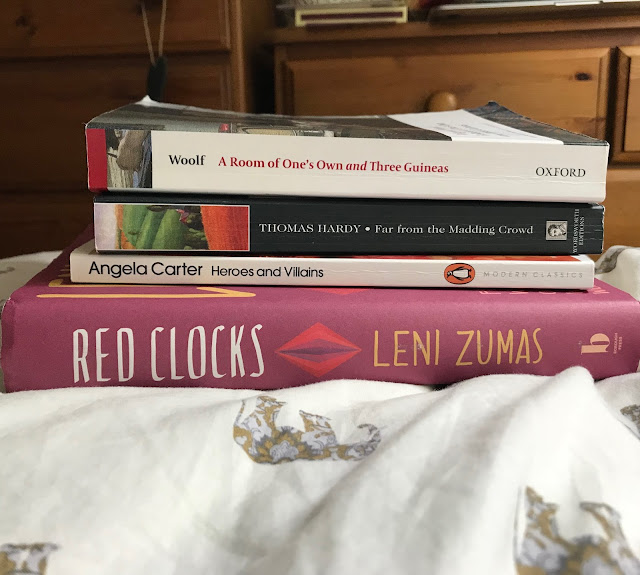 Oh damn. I read this book on recommendation - one of my colleagues literally finished it one morning and gave it to me to start reading that evening - and I am so glad I did. I've only read one Stephen King novel before, which was The Green Mile, and I loved it, but that one was slightly more on the tame side of his writing. Misery is pretty full on and if you don't enjoy reading anything remotely horrific then this is not the novel for you. I, however, loved it. I really liked that there were only two main characters - I tend to read a lot of books with bigger ensembles, so this was quite refreshing in the sense that you truly delved into them and what was going on in this one room. I thought the descriptions were great; graphic without being overbearing (the kind of stuff that if they had included it in the film I probably would have averted my eyes from). It was just really engaging and dramatic in a way that seemed like it could still certainly be real. The ending had me feeling a little similarly to how Paul felt, which was surprising as I'm someone who, whilst immersing them self in a book also easily deciphers them self away from it too. Honestly, a great read - you will consume it in the same way Annie devours Paul's books.


A Room of One's Own by Virginia Woolf

I'm trying to start becoming more diverse in my reading, as since finishing my studies I've tended to stick to reading novels, dropping all of the theory and essays I used to read in favour of fiction. Therefore, I thought who better to start with than Virginia Woolf. My book actually came with Three Guineas in too, which I also read this month, but I started with A Room of One's Own. I loved how colloquial it was - I think essays often have a tendency to be overtly wordy and unnecessarily complicated, but it felt more like Woolf having a chat about what she was feeling and thinking about. Obviously some of the thoughts in the essay are now outdated, but from her contemporary perspective, she makes some important points about how it's possible that women can write literature, and the struggle they've gone through to be able to. She talks about women's access to education - or, more so, the lack of it; she discusses the history of women's writing and how for a long time anonymous was the only evidence that women might be writing at all. It's a great essay, and one I'd highly recommend to anyone interested in women and fiction.


Heroes and Villains by Angela Carter

Angela Carter tends to be a love or hate writer, and having previously read The Bloody Chamber stories, I was already swaying towards love, but now I am wholly there. This is perhaps a novel on the stranger side - if you don't tend to read super widely you might be a little confused or uncomfortable with this one - but at the same time it's truly compelling. At times, especially in the first 20-30 pages I was a bit unsure but at the same time found myself unable to put the book down. It's essentially a post-apocalyptic novel, but described in a way that feels a lot like it's set in the earlier stages of humanity, whilst still very modern in language and some customs? The novel looks closely at gender roles and the expectations of both men and women, as Carter is renounced for, and approaches the topic in a reasonably colloquial way; this is perhaps because some of the characters are unable to read so Carter has stripped back the language for both reader and character alike. I really enjoyed reading this novel, I was completely bound to it whilst reading, and it's one I would 100% recommend.


Far from the Madding Crowd by Thomas Hardy

Continuing my quest to tick a few more classics off my to-be-read list, I thought I'd go with a Hardy novel. I really enjoyed reading Jude the Obscure when I was studying Victorian literature at uni, so I figured reading another novel by the same author would be a nice refresher on literature of that time period. For me, with Victorian or generally older literature, I have to read at least 50 pages in one sitting to really get into the novel, to know who the central characters are and what they're doing, and to start understanding where the plot is going; I think that first bit of reading needs to be super focused and then after that you can just enjoy the novel so much more. I found that regime certainly still worked for me when reading this text, as once I was 50 pages in, I was truly appreciating the content of the novel for what it was. I really liked this novel; it's an offering of traditional Victorian literature, with a slight dramatic/tragic twist, which Hardy is somewhat renowned for. I liked that it showed the pains and difficulties of marriage - something a lot of Victorian novels don't give you - and how realistic most of the characters seemed. A good read.

Red Clocks is a very realistic dystopian novel, published just last month. It portrays the possible - likely - outcome if abortion were made illegal in America, as well as specific laws about adoption and IVF. The explores the lives of four women and the bonds between them - the things that draw them closer together and the things that rally them apart. I thought the characterisation and the way that the characters are built in relation to each other worked really well, essentially forming a debate in itself, which is something admirable in a novel that seems to be fighting so hard against the world it portrays. The women struggle with each of them having things that they want and essentially the society they're forced to live in has caused a lot of this anger towards one another, truly showing, on a personal level, how important it is to constantly champion women's right to do what they want with their body - or else we'll end up hating each other for being allowed what we ourselves can't necessarily have. I really enjoyed reading this novel, and, as infuriating as it can be to read a book on such a disheartening topic, it's important to realise what is right and stand up for our rights in our own reality.

As mentioned, I also read another of Virginia Woolf's famous essays, Three Guineas. Again, a great insight into both wife as a woman in the late 30s and of what women during that era wanted and were doing to pursue further rights. Equally the essay showcasing just how many men were strongly against women earning their own living and becoming better educated, which, 80 years later, seems both strange and yet sometimes, sadly, familiar. The wage gap Woolf describes, though by no means as extreme, still exists today, showing, as she does, that women having the vote and a few rights here and there is not enough. The fact that we still have to fight for equality is, quite frankly, ridiculous, but Woolf's work shows just how far women have come in the past hundred years, and equally inspires us to continue the fight.