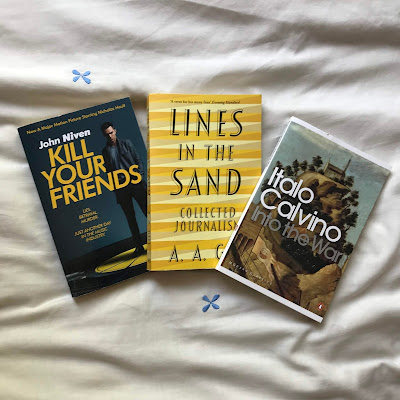 Again, a nice varied collection of books this month, going from recent fiction to a collection of journalism and back to short stories set in World War Two. Enjoyed, questioned and passed on to others for judgement, here's what I thought of this months reads.


Kill Your Friends by John Niven

Kill Your Friends was an angry book. But it was intriguing and it worked. I don't know how accurate Niven's representation of the music industry really is, but it was thoroughly convincing and certainly appeared authentic despite its extremities. I think none of us ever like the first person narrator as much as we're convinced we do. It's so easily to be led astray and made to believe that what they're doing is perfectly justified and valid simply because we're in their head. We're viewing the reality that they're creating for us and it's a complete trap. Ultimately Steven Stelfox is pretty much the devil incarnate. He's conniving and manipulative to the point that he'd kill to further his career, and yet is so drugged up you're made to consider whether he's wholly aware of what he's doing. He is. He obviously is - he makes plans requiring a lot of effort to execute and yet performs them seamlessly. It's a rather sickening novel, but nonetheless makes for a good, though slightly unpleasant read.


Lines in the Sand: Collected Journalism by A. A. Gill

As much as this collection is titled 'Collected Journalism', it does conclusively read as a memoir - a reflection of the author's life, particularly his final years. The collection focuses primarily on the theme and issue of migration. It moves from migration in Europe - looking at the Syrian crisis - to wider fields like Latin America. However there are a lot of other articles, which are often wholly unconnected that are also a part of this book. And it this sense it felt oddly fragmented, like the book didn't fit together very well as a whole. As much as I can appreciate that the migrate crisis is so poignant and of the moment, there were some really nice segments where Gill is talking about his children and taking them to different places or watching them learn; I feel like the book would have read better for me if parts like this weren't so out of the blue and essentially so few and far between. Individually the articles were all very intriguing and thought provoking, but ultimately I wasn't convinced by the way they have been formatted together.


Into the War by Italo Calvino

I also read a collection of three short stories by Italo Calvino this month. This is actually the first text I've read of his, despite If On a Winter's Night a Traveller having been sat on my bookshelf for upwards of three years. The stories are set in 1940 at the point of Italy joining World War Two. As much as we see the cusp of war in the stories, we also see the narrator - essentially Calvino, as the text is certainly autobiographical to a point - on the cusp of adulthood. I think it's certainly an interesting book to pick as a first Calvino text, as it's offered some biographical context in a way that I'm aware none of his other books do, and this could, perhaps, actually be beneficial in reading further works of his. Overall, the experience created in the stories feels very authentic and actually a bit emotional in the sense that you can see Calvino's character as someone with certain morals and ones which the other boys go against. It feels a lot like he's discovering the person he wants to grow into.


I'm also currently about two thirds of the way through the autobiography of Martin Luther King Jr, which I'm quickly devouring. I'll let you know what I thought of the whole thing this time next month.