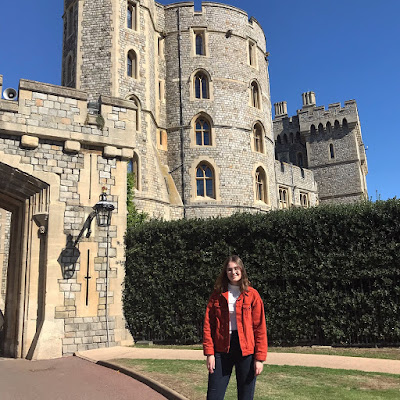 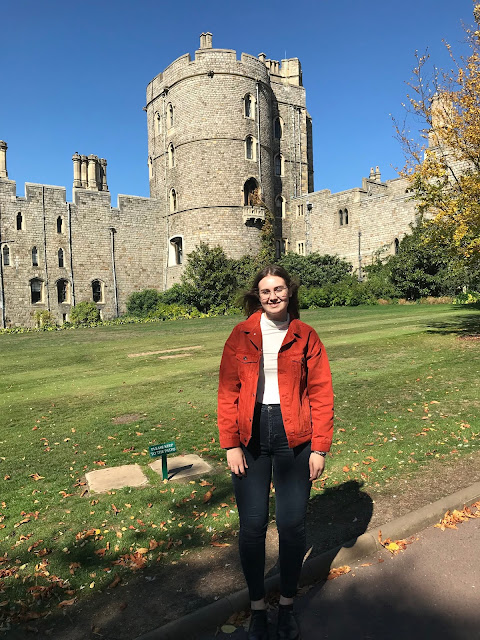 
On Sunday, my Mum and I went down to Windsor Castle. I got her a day trip there as her Christmas present last year, so we were rather late in going (the tickets were going to run out soon), but we picked a glorious sunny day to go.

I thought I'd share the outfit I wore, featuring my no. 1 favourite autumn piece right now: this jacket. Does anything say autumn like a bright rust orange jacket? I think not. I picked this up in Urban Outfitters a couple weeks ago when I was in Birmingham. It's the perfect jacket to through on with a neutral outfit to give the look some life. It's denim, so a texture that suits everything, and I got it a little oversized so it would be comfy with jumpers as the weather gets a bit crisper.

I paired the jacket with Topshop blue/black Jamie jeans - my go to skinny jeans - which I rolled up at the bottom for the look all the kids are going for these days (when I was young, having your jeans too short just meant they were too small (glad it's #fashion now so I don't have flashbacks)). Tucked into the jeans, I wore a thin roll neck top from New Look. Cream is one of my favourite colours to wear, as it compliments my skin tone so much better than white, and this top is the perfect thin layer for the current weather and will equally be a good layering piece come the winter.

On my feet I just slipped on my Dr Martens shoes. These are the Gibson Flat Shoes, which are ideal for pretty much any occasion. I've been wearing them nonstop since the weather cooled down, as I love to smarten up a more casual outfit like this one with a slicker shoe. 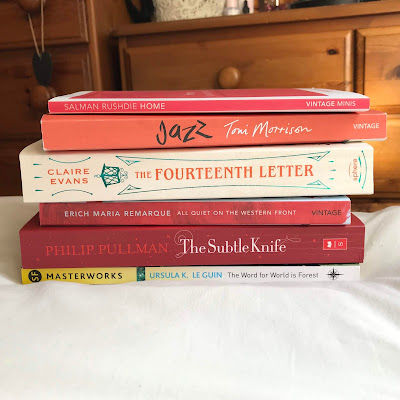 August has been dominated entirely by fiction. I just needed to escape from real life for a while and is there really any better way than by book? Here's what I read this month.


The Word for World is Forest by Ursula Le Guin

Honestly, not the best start. I can really appreciate what Le Guin was doing with this text, and parts of it I thought were brilliant, but sadly they were overshadowed by my general feeling of dislike for the novel. It felt too jumpy for such a short text; jumping around between characters and whatnot is normally fine for me but I just felt like I didn't really know what was actually going on with anyone because there weren't enough words to explain. I liked the premise: set on a different planet that has been colonised by earth, effectively portraying colonisation as it was during the British empire but on a bigger, more extreme scale, and reducing, as a result, a peaceful species to violence. I read somewhere that the novel was Le Guin's negative response to the Vietnam War, which makes perfect sense, and maybe explains better why the book feels so fragmented. I think if it were longer and the plot was bound together with more complex characters then I could've loved it. But sadly just didn't work for me.


The Subtle Knife by Philip Pullman

If you liked the first book, you'll love the second. Still baffled by how I've never read the His Dark Materials trilogy. The plot development is so interesting, I can't remember the last time I was so intrigued by a set of books. I love that there are so many different ways I can imagine these texts going and yet they still seem to surprise me (and I'm someone who constantly spoils books for myself because I've thought of all the possibilities and have worked out what will happen, so this is pretty rare). I liked seeing a world more like the one I recognise, especially because the books are largely set in Oxford, which is where I live, so I'm constantly recognising the exact locations that are being presented, which is actually quite exciting. It makes the books seem more real because they're so close to home for me. Seeing Lyra's character develop in tangent to Will's is really compelling, and her adjustment to the different worlds they've discovered alongside her personal growth sit really nicely together. Pullman is a genius.


All Quiet on the Western Front by Erich Maria Remarque

All Quiet on the Western Front is such a tragedy and yet such a triumph. I have never been so compelled by a war novel. And I had yet to read one written from a German perspective until now; it really struck a chord in me. The novel truly reminds us all that every man who fought in WW1 (or 2) was just an ordinary person, with no real anger toward anyone on the other side, but rather just doing a mandatory duty. The novel truly portrays the stolen youth of war. The main character and his friends had literally left school and joined up, and the text shows the inner turmoil that this has caused them. Paul has to endure the deaths of all his closest friends, even having to go to one of their mothers and explain to her that her son is dead, attempting to convince her he didn't suffer, lying outright so she wouldn't have to know the truth. The novel shows the personal devastation of war that its author experienced outright. Though the book is specified as a novel, it is certainly somewhat anecdotal, perhaps part of how the author accepted what really happened and coped with how difficult it all was. Definitely one I'd recommend.


The Fourteenth Letter by Claire Evans

Honestly, I thought this book would be so rubbish, but I liked the idea of the plot so I gave it a go anyway. It wasn't an intellectually challenging work of fiction, but that didn't mean I didn't enjoy the way the plot progressed. Essentially, it's a book about an elitist group - actually a family with three strands - who want to breed in a way that keeps their bloodline 'superior'. Naturally, this formula of rich people with an elitist regime means incest. I think you're not meant to work it out until the characters realise what's going on, but it's pretty obvious from the get go. It was a very easy read, so if you prefer a book that you can breeze through rather than having to think too much about it, then I'd recommend this for you. The characters are interesting and I thought the plot moved nicely, but overall a bit too basic for my typical liking.

Having only ever read Beloved by Toni Morrison, I thought it was about time to get stuck into some of her other texts, starting with Jazz. Jazz is set in 1920s Harlem, and is essentially a historical novel depicting the black experience of the Jazz Age, a time typically looked at as joyous and prosperous. The structure of the novel works in a musical way, with different characters seemingly creating their own stories, which are then worked together to form one overall composition. A lot of these different section where we focus on different characters are still exploring the same events, just from different perspectives and at different times - before/during/after. I loved this novel. It felt so truthful throughout, despite the different voices and lack of one overall trustworthy narrative. I think the changing voices added to the honesty of experience, portraying the Jazz Age for what it really was for African Americans: not all it's cracked up to be. Morrison is such a talented author and I'm excited to continue reading her work.

Home by Salman Rushdie is a part of the Penguin Vintage minis series, featuring thirty different authors speaking on a subject they a specifically well written about. The texts draw from various different works of the writers', compiling what is fundamentally a basic guide to their work, giving you a little dip in to their writing so that you can decide on what further reading you'd be interesting doing on their topic/work. Rushdie's book is focused on the notion of 'home', what it is and how to deal with feeling at home somewhere you are not recognised as belonging. Rushdie discusses the struggle of being Indian but attending school and university in England, giving personal insight into issues of racism and his own sense of belonging - speaking perfect English and yet still being labelled 'other'. He also delves into his family living in both London and also their moving to Pakistan, somewhere he could not accept as a home. It was a great way to get into what Rushdie writes about in his fiction and I'd be interesting in reading Midnight's Children after reading this mini.