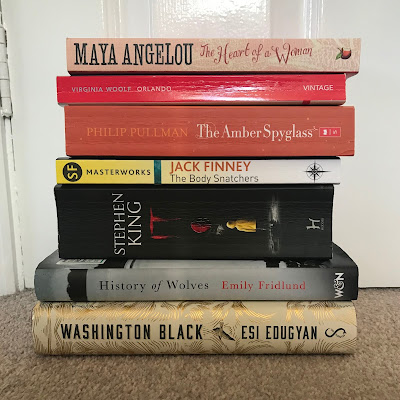 A little late getting this one to you I'm afraid, but nonetheless I do, of course, have a lot of thoughts on the books I've been reading over the last two months. I've been rather busy recently, so reading has been the perfect way to end the day and unwind before going to sleep. Writing about what I've read, however, has just been something I've put of again and again. Anyway, no more rambling, here are my thoughts on my recent reads.

The Amber Spyglass by Philip Pullman

After reading the other His Dark Materials books, I found that this one lost a little something when it moved from a fantasy/adventure book to more of a young adult romance. The Subtle Knife was definitely my favourite book in the series so I didn't expect that this one would top it to be honest, and I did find it rather anti climatic overall. I find Lyra really lost her character in this book, which, I can clarify, is not what usually happens when a girl grows closer to adulthood and definitely should not have been what happened to this particular girl. I get that she would grow more self-aware and self-conscience, but becoming completely submissive to some boy who's the same age as her (and therefore lacking the maturity she's gaining, as boys, of course, take a while longer) was utterly disappointing and quite disturbing. Offering us a character that can make her own decisions and fight for what she wants and then literally giving up her whole identity for a boy is the most appalling of choices Pullman could have made for this book, both for its target audience - kids the same age as its characters - and for anyone who enjoyed the essence of the previous books. I was disappointed, to say the least. I get that it is what it is, and I can't deny that I found the discussions of the power of religion intriguing, but it just didn't work this time.

I think Modernism just really isn't for me. Something just makes novels of the era far too difficult for me to follow and stay interested in. The concepts are all very interesting, but there's something in the way language is used that just makes it seem so utterly dull to me. The way that Orlando changes as he moves through distinctly different time periods seems like the kind of thing I'd love to read, exploring the experience of being a woman with the knowledge of how it feels to be the a man and to be treated as a man. But I truly found it painful to read due to the style. I'm sure it's just me and me distaste for the style, but if you also dislike the tropes of modernism and struggle to see the story beyond them, I'd recommend giving this one a miss.


The Heart of a Woman by Maya Angelou

Maya Angelou is such a brilliant author, is the sense that she draws you in and completely absorbs you into the story, making it feel like you're almost there, watching the events unfold. The Heart of a Woman is the fourth book in her series of autobiographies, and focuses largely on her part in the civil rights movement from the late-50s to early-60s. This is actual the first of her books that I've read, as the subject matter is something I found noteworthy, but it certainly won't be the last. I was truly captivated by both Angelou's story and her style of writing. Reading a black female writer's account of this period in time and how she felt throughout it was truly fascinating, thought provoking, and rather heartbreaking. It felt a lot like reading a diary, somewhere in which its author could actually be honest about how they were feeling about all the things that they had to face each day, whether that be events specific to the civil rights movement, or to being a mother, or a woman, or all of these things at once. It was compelling in a way that I rarely find, where the author doesn't wish to overwhelm the reader or make their writing exciting on purpose, but where the book ignites something in you through its simple honesty. Wholeheartedly recommend.


History of Wolves by Emily Fridlund

This book was so odd in so many ways. It follows a teenage girl known as Linda as she tries to make friends and feel apart of something, but ends up befriending a woman and her child who live in the same area as her. The family she befriends appear very strange and isolated, indicating that they've got something to hide: their religion and its ultimate implications. Stylistically, it was very easy to read, which sometimes convinces me that I must be enjoying something, but honestly, I really did not enjoy this book. Whilst reading it I was obviously aware that there was something very off about the whole thing - this strange family befriending a random girl - and so it was bound to end in some disaster or another. The book kind of explores having someone else's religion or belief system, as such, thrust upon you in a way you're slightly unaware of and therefore less resistant to. Linda is effectively groomed, in an apparently paedophilic way, into a religion. And I just hated the idea. I hated the idea and I hated how it was done in the book. I found myself just getting more and more wound up by this stupid girl who seems to just want to make friends, but ultimately she actually just wanted to play some grand part in other people's lives, even when she knew what must have been going on because it was impossible to miss, especially when you're being fed into it. It was just bad.


It by Stephen King

I might have mentioned in one of my previous book posts that one of my colleagues is a die-hard Stephen King fan. Therefore I've been told constantly that I need to read one of his most famous books, It. I thought I'd save it for October, since it's certainly a Halloween read should we start confining books to seasons or holidays. This one's pretty crazy, although I'm sure anyone who's seen the film would know this by the general gist. The main characters are all very likeable, making the situation they're thrown into entirely unsettling and, at times, upsetting. It is, of course, a sizeable book, meaning that there were times when I was completely confused about where it was going or would end up; sometimes this was frustrating but more often than not, I really liked the suspense. I have to admit though, I don't know what could have been cut out of the book to perhaps make it more concise. It's very much a complete work that you need to read in its entirety to appreciate and understand what's going on throughout. The way the book shifts in time is done rather ingeniously, mapping out everything that happened when the group were younger as the characters go through the motions to remember and understand what should be done as adults. The only real disappointment for me was the ending. No one wants a happy or an easy ending to a book like this. And as much as I know that there were dramatic deaths and trauma to get to the end, it just felt like a bit of a cop out to be honest. Overall, one I'd definitely recommend reading just to find out where King's going with it.


The Body Snatchers by Jack Finney

I find sci-fi novels from the era in which The Body Snatchers was written very hit or miss. They are often fragmented in such as way that makes them barely readable. Luckily, however, this novel is written in a far easier style, but a basic structure following Miles Bennell in his attempts to understand and avoid the alien species invading the bodies of all those in Santa Mira. I really enjoyed reading this novel; it was a nice, easy read, but still kept me in the Halloween spirit after the dramatic and more complex It. The creatures that are formed in the novel, coming from seed pods and mimicking the appearance of a specific person, take over the actual body of the person they have evolved to look like. They are then unable to reproduce, meaning they are effectively taking over the human race in order to eventually wipe it out. The only reason they appear to do this is because they are parasites. The book has obvious nuances of political fiction, making the invasion a not so subtle comment on the anxieties of cold war and the nuclear arms race of the 1950s. All this makes the book very politically aware and shows the damages that could be done by nuclear war, with the potential to annihilate mankind, vocalising a major concern during this era. An easy read with a strong underlying message. Definitely one worth sparing a few hours for.

Washington Black definitely has a similar feel to it as Colson Whitehead's The Underground Railroad, so I now completely understand the comparisons I read about before deciding to buy this book. The novel follows the eponymous character, Washington Black, as he escapes slavery by means of an unusual form of transportation: a 'cloud-cutter', or as we would perhaps recognise it, an airship. It's a book that mixes adventure with the horrifying facts of slavery, giving the means of escape through flight and then through further travel, but all this movement as a result of a constant fear of being caught and taken back to the life that was hardly a life at all. It's a really beautifully written novel, despite its powerful, haunting imagery. I did find that towards the end of the novel, when the characters start jumping from place to place almost pointlessly, it did lose something and felt rather unfocused, which I didn't enjoy so much. The book seems to offer a well-known message: knowledge is power. The more Washington continues to learn and better himself through gaining knowledge and putting it to practical use, the closer he comes to being his own, fully formed person. By the end of the novel he is a scientist, but sadly knows there's little chance he'll receive recognition due to the colour of his skin. The novel presents the period following the end of slavery very well, showing the turmoil ex-slaves face in trying to be a highly-functioning member of society. It's an honest, a sad, and yet somehow still triumphant book. I really enjoyed reading it.